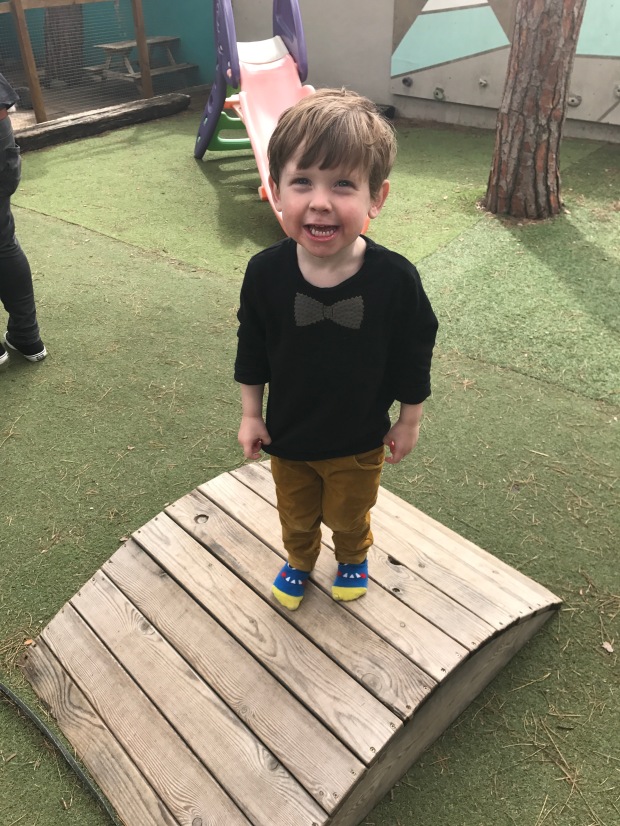 I’ve been thinking about writing this blog for a couple of weeks now. I think it came to me on a particularly bad day of High Maintenance First Child Syndrome. HMFCS is the term to account for all the high maintenance behaviour your first born child displays. I must point out here that it is of course completely made up, also I cannot claim the rights to the founding of this phrase. It was a very lovely friend who told me about it whilst trying to console me after a desperate text relating the horrors of my day. She too had a child with HMFCS and therefore coined the, frankly genius, phrase. Basically if it makes you feel better to give a reason for your child’s ghastly behaviour, let’s face it you can’t blame it on teeth forever, then read on!

Since the terrible day that led me to think about writing this post, typically my high maintenance first child has been almost angelic. This led to some internal debate about whether I should still write it, however there have been a few glimmers of that well known behaviour that has reminded me why I thought about it in the first place. I must start off by saying that 80% of the time he is actually brilliant, he’s clever, imaginative, caring, funny, kind and he’s my best friend. But you know sometimes, despite all your best efforts, you fall out with your best friend and this happens fairly frequently in our house. When I have those days, on which he completely infuriates me, it makes me feel so much better to blame it on high maintenance first child syndrome. HMFCS has many different manifestations, maybe your child won’t eat anything that isn’t cut into a heart shape, or maybe they won’t wear any clothes that have buttons. When you have those days where you think ‘Arghhhh’ just blame it on this!

Here are a few of the ways that my boy displays this behaviour..
1. Probably the most obvious at the moment. You know when your baby is little and you have to painstakingly follow them around the park, their sweaty little fists clamped firmly around your fore fingers and you think ‘One day I’ll be able to sit on the bench and relax for a bit while they play’.. yeh that never happened for me. Henry has decided that I have to be involved in every trip down the slide, every adventure on the climbing frame and I am most certainly not to speak to any other adult. If I try to sit and have a conversation with a friend he’ll do everything in his willpower to ruin that moment. He’ll suddenly want to venture to the furthest corner of the park, or eat every snack in the bag and then demand more, or drag me to a specific position about 15 cm from the slide to watch him climb up and slide down umpteen times.. Then if I say I want to have a sit down or a quick chat to my friends he will cry, scream, moan, dribble and snot until, on many occasions, I’ve had to leave. This doesn’t just happen at the park but at parties, toddler groups etc etc. You might think I sound really inattentive but I assure you it’s excessive and downright frustrating! You see all the other children playing happily without the constant need for their parents attention and it makes you wonder if it’s something you’ve done wrong. Have I not been giving him enough attention, have I been giving him too much attention? Of course you start to blame yourself.. but don’t! It’s most definitely a result of High maintenance first child syndrome.

2. The second way Henry’s tendency to be high maintenance is displayed is his absolute loathing for any form of hair washing, hair cutting, hair brushing. I have literally tried everything!! The promise of sweets, presents, a trip out, just to trim an inch or two off his hair. All sounds quite plausible and acceptable to him until the scissors come out. In the end I just have to hold him whilst he cries, screams, writhes and snots everywhere while a very lovely and patient hairdresser struggles through, possibly, her most challenging hair cut ever! If extreme haircutting was a sport this would be what it looked like! Also we can’t brush his hair so I normally have to accept his hair will look pretty dodgy if he’s woken up a disheveled mess. Washing has slightly improved but we have to use a flannel to dampen his hair and I have to have my other hand on his head at the same time…? Seeing as he has quite thick hair the flannel doesn’t quite do the job, however it’s better than a screaming, slithery child dragging you head first into the bath every time you get the jug out! He also will not shower… HMFCS!

3. Lastly, (could list a few more but I feel mean dragging all his flaws into the public domain because none of us are perfect are we) he HATES hand dryers/anything that produces a loud noise. Now I know what you’re thinking, number two and three sound suspiciously like I have a ‘highly sensitive child’, and I’m pretty sure I do, so in a way it’s not really his fault but still it’s quite irritating! It makes going to the toilet when out and about an absolute nightmare. If I’m on my own with the two of them and I’m desperate for a wee it’s a hurried, stressful, noisy event, even worse if HE needs a wee. Try wrestling a scared, screaming, dribbly, snotty (see a theme here?) child onto a toilet when he really doesn’t want to. It’s hard. Add a second child into the mix, one who is going through that separation anxiety stage, it’s even harder. Then there’s the people in the loo who, unless they were on another planet, MUST have heard the commotion in the next door cubicle but still go out wash their hands and use the hand drier??? Seriously.. not helpful.

Anyway, add these behaviours to the fact that he hates having his feet measured, asks me 75 questions a day, will NOT share a damned Thomas train and will only eat cheese sandwiches for dinner, I think I have every reason to believe he has high maintenance first child syndrome (or he’s just an ordinary 3 year old but it’s more fun to look at this way).

Despite all this of course I love him and his sister with every fibre of my withered, anxiety ridden being and wouldn’t have them any other way…… ha!

This is a text widget. The Text Widget allows you to add text or HTML to your sidebar. You can use a text widget to display text, links, images, HTML, or a combination of these. Edit them in the Widget section of the Customizer.